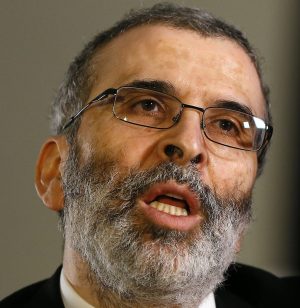 The National Oil Corporation (NOC) has come out fighting in a battle with the Presidency Council which yesterday stripped the oil ministry of key powers and assumed many of them itself, while also diminishing NOC’s role.

Tonight NOC chairman Mustafa Sanalla protested that the PC had no authority to make such changes.

“I have asked the Presidency Council to withdraw its recent resolution,” said Sanalla. “It has exceeded its authority. Only the House of Representatives, the legislature, has the power to make these changes”.

He went on to insist that NOC’s authority, responsibilities and duties were based on its articles of association from 1970 amended in 1979 which were enshrined in Libyan law.

Sanalla protested that NOC had long supported the establishment of a genuine government of national accord able to speak for all Libyans.

But he continued: “Until we have a political settlement, our duty is to administer the country’s oil resources in trust for the benefit of the nation. The proper administration of our oil resources is vital to the future stability of the country.”

It has not yet been possible to understand why the PC moved against the oil ministry, which has been long regarded as little more a cypher and a useful source of yet more government employment. So little did Serraj think of its role that in the final Government of National Accord cabinet list that he and his PC colleagues produced, no one was named as oil minister.

The internationally-respected Sanalla has had several run-ins with the PC over money. NOC wants $2.5 billion in large part to fund the repair and restoration of damaged oil and gas infrastructure. It also wants control over its funds. But as with most other state institutions, NOC has to go and ask the Central Bank to settle its bills. This is not a fool-proof process. It recently even failed to have its salaries paid.

Politically, Sanalla also finds himself between a rock and a hard place. His insistence that NOC is a purely technocratic organisation whose job is to produce and export oil and gas has meant he has found himself operating across the political divide.  When Hafter ousted Ibrahim Jadhran’s Petroleum Facilities Guard from the four Oil Crescent terminals last December, the LNA handed their control back to NOC. This caused mutterings in Tripoli.

However after the ultimately abortive attempt by the Benghazi Defence Brigades to retake Sidra and Ras Lanuf at the start of this month which, despite PC denials of complicity was clearly backed by the its defence minister Colonel Mahdi Bargathi, the rival eastern NOC was revived to challenge Sanalla’s NOC . Eastern NOC is once again reportedly seeking to sell oil independently of NOC in Tripoli.

Thus Sanalla and the organisation he heads is viewed with suspicion by Tripoli for managing to operate successfully in the east and with suspicion by the east because the corporation remains in its Tripoli HQ where its technicians, geologists, traders and back office staff and systems are housed.

It may seem curious that at the very moment that NOC is under pressure from the east, it should also find its position challenged by the PC in the west.