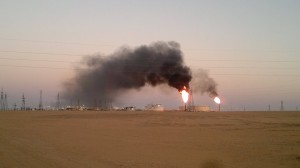 The Sharara field once again shut in by the blockade  (Photo: Akakus Oil)

National Oil Corporation’s (NOC) plans to push production toward one million barrels per day have come to a juddering halt with the resumed pipeline blockade at Reyayna and the loss of a third of all Libyan output.

NOC has been forced to declare force majeure at the Zawia export terminal following the cutting of the flow from the Sharara and El-Fil oil fields and the loss of some 252,000 bpd. The export terminal can load 199,000 bpd. The two fields only came back on stream in December after the pipeline had been shut  for two years at Reyayna.

NOC chief Mustafa Sanalla led the campaign to persuade the blockaders to end their interdiction of crude from the country’s two biggest producing fields in return for economic aid.

Today, one of the blockaders explained: “Sanalla promised us, when we agreed to reopen the pipeline, to reform the deteriorated situation of the people in our area but until now he has done nothing for us.”

A member of NOC’s media office has told the Libya Herald that the Misratan Third Force had sent a letter to the state oil company a few days ago warning  that some uncontrolled militia would threat Sharara oil field pipeline.

The two blocked field have a potential daily output of 365,000 barrels. With last December’s reopening of the pipeline after two years production was increased slowly not simply because of the technical reservoir management challenges in the Sharara and El-Fil fields  but also because of sludge and maintenance issues in the pipeline itself.