Jordan wants Libyan embassy to be in PC hands 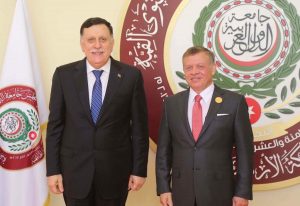 At present the embassy, like small number of other Libyan missions around the world, supports the Beida-based Thinni administration. Embassy staff have told this newspaper they completely opposed to the Presidency Council (PC).

They refused to provide logistical support to for in the run-up to the current Arab Summit held in Jordan and during it. They now predict that if the PC takes over the embassy, there will be two missions in the Jordanian capital, as happened in Cairo, one supporting the PC and the other supporting the Thinni government, the House of Representatives and Khalifa Hafter.

The Jordanian move is a blow for Hafter who has assiduously courted the Jordanians and appeared to have the support of King Abdullah .