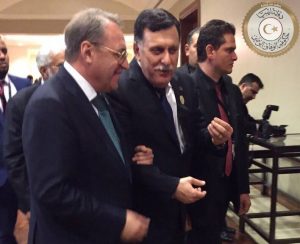 Russia’s deputy foreign minister Mikhail Bogdanov has told Presidency Council head Faiez Serraj that Russia is willing is willing to provide help to Libya to deal with the political crisis in the country. However, the nature of the help has not been publicly disclosed although Bogdanov, who has special responsibility for the Middle East and Africa, is reported saying that Moscow wants to see Libya a prosperous and united country.

Ultimately though, he added, the Libyans themselves have to settle their own differences and do so through national dialogue.

The two met on Wednesday on the sidelines of the Arab League summit in Jordan.

Noting the potential importance of Russia’s role in helping resolve the Libyan situation, Serraj, who last saw Bogdanov during his visit to Moscow at the beginning of March, also once again raised the issue of Russian companies returning to work in Libya.

The issue of Libya-Russian relations has become something of a problem in the context of Libyan-US relations. The Trump administration in Washington is reported not only to be angry with Khaifa Hafter for his moves to rebuild ties with Moscow, particularly military ties, it is also said to be wary of Serraj’s efforts at what it sees as much the same.