UNSMIL security chief presses PC to get a move on 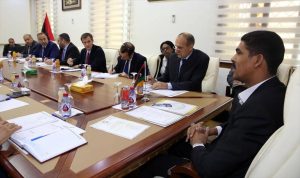 UNSMIL’s  security chief, Italian general Paolo Serra has once again been in Tripoli to push for  the Presidency Council’s (PC) more rapid development of security forces under civilian control.

Today Serra saw PC member Ahmed Hamza. A week ago he was in the capital talking to PC deputy chairman Ahmed Maetig.  His message has continued to be that the army, police and presidential guard should be up and running as soon as possible.  They should also operate under a unified command structure that embraced all security and military formations in the country.

He also pressed for the PC to set up a process whereby militiamen could surrender their weapons to secure storage areas and then, as they wished, be absorbed into the army or the private sector.

He stressed that the demobilisation of militiamen and the handover of weapons was one of the key provisions of the Libyan Political Agreement.