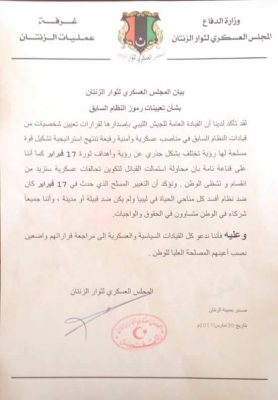 The appointment by Khalifa Hafter of officials who supported the Qaddafi regime to military and security posts is not acceptable, Zintan Military Council has said in a letter to the general command of the Libyan National Army (LNA). In a statement issued yesterday saying that such appointments had to be reversed, it accused the LNA of pursuing a vision “radically different from the vision of the revolution of the 17th of February”.

It also said that attempting through such appointments to bring tribes into alliance with the LNA would in fact divide the country, not unite it,

The LNA leadership had to put the interests of the country first, Zintan military council demanded.

Although no names were mentioned in the statement, it is believed that it was triggered by theLNA’s  appointment this week of Brigadier Mabrook Sahban as its commander of the Sirte military zone. A senior officer in the Qaddafi forces during the revolution, Sahban is hated in Zintan for his role dueing the revolution when his forces besieged and bombarded the mountain town.