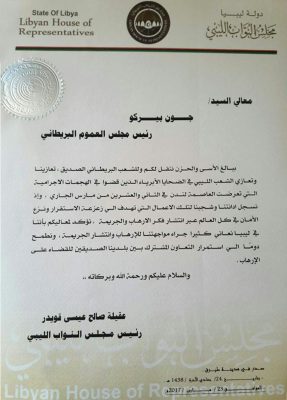 The House of Representatives has condemned yesterday’s terrorist attack in London. In a statement, it expressed solidarity with the UK, sending its condolences to the British people for those who had been killed in the outrage and praying for a speedy recovery of those who had been injured.

Terrorism, it noted, threatened the whole world. It had “no bounderies and no religion. Libya too was under attack, it said, and the London attack showed the justice of the Libyan National Army’s fight against the same terrorists.

In a separate letter to the Speaker of the British House of Commons, HoR President Ageela Saleh expressed his own condolences at the deaths of three people killed outside the Houses of Parliament in London by a terrorist.

The attack has been claimed by the so-called Islamic State.

So far there has been no statement on the London attack either from the Presidency Council or the State Council.