Libyan archaeological treasures are in danger of destruction, a seminar in Tunis has been told. The problem is that since the 2011 revolution the lack of effective government has meant that uncontrolled construction and urbanisation were mushrooming around historic sites, notably Cyrene. At least one site in Cyrenaica has been almost completely destroyed, with new roads being laid ahead of houses being built, Vincent Michel, head of the French Archaeological Mission to Libya, told the seminar on Libya’s heritage, “Libya: A voyage across time”.

Libyan archaeologists Hafed Walda and Khaled El Haddar also spoke of the vandalism and destruction as well as theft since 2011, with Walda describing it as a violation of Libyans’ human rights because they were losing their right to their heritage.

Mustafa Turjman from the department of antiquities in Tripoli likewise warned of the threat from uncontrolled urbanisation.

Haddar has published a “Red List” of Libyan treasures stolen or in danger. Libya, he and others pointed out, not only has five world heritage sites, classified by UNESCO – the Akakus mountain caves, Ghadames, Sabratha, Leptis Magna and Cyrene (all of which were placed on UNESCO’s List of World Heritage in Danger last July) – but “hundreds and hundreds of other archaeological sites” across the country. All were at risk.  Libya, too, had seen the biggest archeological heist in history when thousands of objects stored at a bank in Benghazi were looted during the revolution. The figure is now put at 16,000. They have never been found. 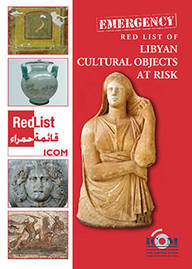 There was a massive diversity of cultures he noted – pagan, Christian, Islamic, Jewish – but were all part of Libya’s rich history. Starting with the prehistoric Akakus rock paintings any of which have been damaged by vandals with spay paints, he traced Libya’s cultural history from the period of the Romans and Greeks to Latrun, west of Derna, where the French Archaeological mission restored a Byzantine basilica in 2005, to the Fatimid ruins at Ajdabiya, to Jaghbub on the Egyptian border where there are remains of small pyramids, and even to the architecture of the Italian colonial period.

The Italians, he agreed, had concentrated too much on the Roman period and there was a need to look more at local monuments but all were in danger and all belonged no only to Libyans but were part of the whole world’s heritage.

Part of the Libya cultural festival Min Ajl Libya organised by the French embassies to Libya and Tunisia, the seminar has been the largest gathering of archaeologists and historians focussed on the country in several years.

The event, while enabling warning bells to be rung about Libya’s heritage under threat, was not enough to stop the destruction, Haddar said. “We need practical steps on the ground”, he insisted, such as financial and other support from the Libyan authorities and protection to be provided for sites. He and others at the seminar noted that at present, protection was being provided as hoc by concerned locals. Unfortunately it was also locals who presented the gravest danger, trying to take over areas for development.

Cyrene, Haddar said, had to be a major protection project.

Also addressing the event was the head of the Louvre Museum in Paris, Jean-Luc Martinez. Declaring a particular attachment to Libya and its “exceptional” heritage, he said it had to be saved. Local people were important in doing that. Destruction was not new, of course, he pointed out; it had been going on almost as long as sites ceased to be sued. But without local support, the battle to protect those sites would be lost.

Among other presentations during the seminar was one by French archaeologist Claude Sintes on discoveries by underwater archaeologists including the full extents of the ports at Sabratha, Leptis Magna and Appolonia (modern Susa).

Another presentation was on statues of Classical-era goddesses and of the dead from the necropolis in Cyrene, itself first excavated by the French consul-general in Tripoli, Vattier de Bourville, in 1848.

It was reported during the event that the Louvre museum hopes to mount an exhibition of Libyan treasures but is awaiting the green light from the Libyan authorities.

Working to lift the dead hand of Qaddafi: rare signs of optimism in Tripoli

Thinni heads to Cairo in search of military support