The Presidency Council (PC) has declared its firm support for Misrata municipal council after hardliners announced it had been sacked and would be replaced by a steering committee.

In a statement today, the PC said that it would have no dealings with anyone other than the elected municipal council, that what the hardliners were doing was criminal and undemocratic, and that legal action had to be taken against them.

Yesterday, at a public meeting on the Martyr’s Hall in central Misrata called by the militants, it was announced that the municipal council had been suspended, that an interim steering committee was being set up to run the city and that fresh elections for a new municipal council would be organised.

Despite the attempted coup, the militants said they supported democracy and the peaceful transfer of power.

Led by the Misrata military council leader Ibrahim Ben Rajeb, a known Islamist, they also include Ali Al-Jaarani, who was a member of the previous local council. He is said to have been promised the job of heading the interim steering committee.

Supporters of fellow Misratan Khalifa Ghwell and his so-called “National Salvation Government”, the militants have been trying to force the municipal council to resign for some time. Matters came to a head last Friday evening following anti-Misrata protests in Tripoli, when they stormed the municipal council offices. That was followed on Sunday with them occupying the building housing Misrata FM radio and Misrata TV and announcing that the municipal council had been removed.

Following the declaration, they declared there would be a public meeting to ascertain the mood of the city and decide what to do with the municipal council. In the event, the meeting yesterday evening was packed with hardliners and their supporters – many of them refugees from Benghazi – who constantly shouted for the council to be sacked. 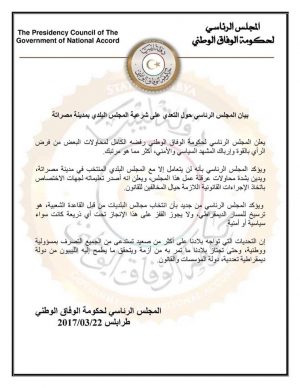 The hardliners are seen as trying to take of a growing sense of public frustration with Misrata municipal council for being preoccupied with national politics and not with delivering local services.

“We have an unfinished hospital, damaged infrastructure, a housing crisis, broken roads needing to be resurfaced, inadequate draining resulting in flooding every time it rains – lots of problems, and lots need to be done,” noted one prominent local civil society activist who did not want to be named.

Despite this, however, he said that the efforts to topple the council would not succeed. “The vast majority of ordinary Misratis refuse this [move],” he said.

It would fail from several reasons, he said. Quite apart from the PC’s refusal to have anything to do with them, no institutions of state, such as the Central Bank, would work with them. Nor would other municipalities. “It is a failure from the start,” he said.

Significantly, a senior commander of the Halbous Brigade – one of the city’s more important army units – has said that it completely rejects the militants’ move. The Mahjoub Brigade, one of the other top Misratan units, has made no announcement but is said to also fully support the municipal council.

The council has dismissed the militants’ moves.

Meanwhile, this morning journalists from Misrata FM and Misrata TV protested outside the court building in Justice Square insisting that the stations must not be dragged into political disputes.

Kobler warns of war crimes being committed in Libya