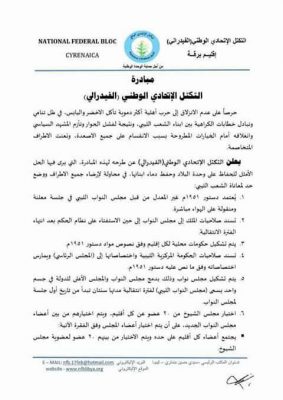 A new Cyrenaica federalist party has been formed with its programme attracting support from several members of the House of Representatives.

The programme drawn up by one of the new party’s leaders, Abubaker Al-Gatrani, calls for the restoration of the 1951 constitution with suitable amendments such as the powers of the king being transferred on an interim basis to the House of Representatives (HoR) until a referendum on a new system of government occurs.

WHO and the EU deliver portable X-ray machine to Tobruk

The party, the National Federal Block, also expects provincial governments to be re-installed in each of Libya’s three historic regions, while the Presidency Council would function as the federal government.

There would be a new House of Representatives combining the current HoR and the State Council, and it would then select a new senate comprising 20 members each from the three regions. Oil revenues would be distributed to the three provinces.

On the armed forces, they would be one of the few national institutions, charged with defending the country as a whole. As for the “general commander” (i.e. Khalifa Hafter), his job would be merge all the various military councils and armed formations into the army and dissolve the militias within three months of the party’s programme being adopted.

The chances of this actually happening are open to doubt. Relations between the new party and the Libyan National Army are said to be poor. Hafter does not back federalism although currently many federalists back him.

However, the agenda has backers in the HoR who say they want it discussed in parliament. One concern, though, according to an HoR supporter, is the size of the new HoR. “It would be too big”, he said, asking not to be named. But it was good starting point, he added – and there could be amendments.

Divisions surface in HoR over agenda and budget proposals