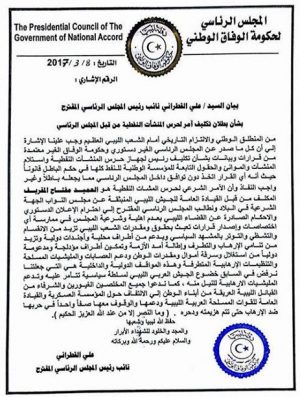 Ali Gatrani, the boycotting member of the Presidency Council (PC) who is a close ally of Khalifa Hafter, has condemned its decision that the Ras Lanuf and Sidra oil terminals be taken over Petroleum Faciltiies Guards headed by Idris Bukhamada.

The decision had not been taken by the full PC and was therefore illegal, he said today.

The only legal person in charge of the terminals, he noted in a statement dated today and headed “The Presidential Council of The Government of National Accord”, was Brigadier Muftah Al-Magarief, selected last year by the LNA as head of the central PFG in place of Ibrahim Jadhran. The LNA was itself legally appointed by the House of Representatives (HoR) and the PC had to accept the HoR’s legitimacy, he said.

Yesterday, the HoR voted to reject all nine members of the PC, including Gatrani.

The PC appointed Bukhamada, an ally of Jadhran, as head of the PFG last month. He was ordered by it on Tuesday to take over the two terminals seized last week from LNA forces by the Benghazi Defence Brigades.