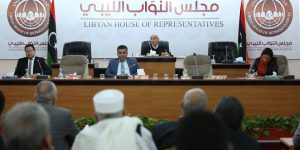 The HoR in session (Photo: HoR)

In a vote today, The House of Representatives has set out its terms for taking part in dialogue with the State Council on the Libyan Political Agreement (LPA) approved at Skhirat, Morocco, 16 months ago.

According to HoR Sidra member Salah Fhaima, who is spokesman for the National Sovereignty Bloc, these are:

According to Fhaima, if these conditions are agreed, then the HoR will form a dialogue committee to meet with a counterpart from the State Council.

Under the terms of the LPA, it can be amended only by a committee consisting of an equal number of members from both the HoR and the State Council.

Significantly, despite the insistence that the dialogue meeting be in Libya plus accusations by some HoR members that both UNSMIL and the Arab League support the PC, HoR president Ageela Saleh said that the dialogue sessions, when they take place, should be supervised by both bodies.

Condition No. 4 may be the most difficult for the State Council to concede. Several of its present members, such as Belgassem Gzeit from Misrata, were not elected to the GNC in July 2012 but were admitted later as replacements to members who had resigned or died.

According to the HoR, today’s session discussed solely the Dialogue issue and that there were 55 members present. Normally this would not be enough to constitute a quorum, but it is the session is deemed a continuation of one which started with a quorum.

An announcement last Monday that the next session would also discuss the Beida-based interim government’s 2017 Budget appear to have been quietly set aside. The next session was in fact supposed to be the next day, Tuesday, but did not happen because of the visit of the French ambassador and the deputy UN special envoy. In any event, there was anger last Monday among members at the budget being discussed at all at the moment. Given the political crisis, they felt that the dialogue issue should take priority.