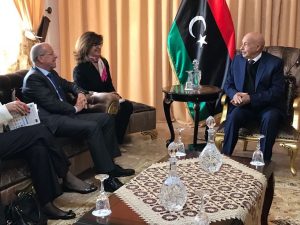 Despite it being subject to conditions, UN envoy Martin Kobler has praised the decision announced yesterday by the House of Representatives (HoR) to take part in dialogue with the State Council on amendments to the Libyan Political Agreement (LPA). He described it as “very constructive”.

However, Kobler also said he was concerned that yesterday’s vote on the raft of conditions to be implemented if the HoR is to join the dialogue had not been fully representative. Just 55 of the HoR’s 200 members attended. Vitally important decisions required the full involvement of all HoR members, he added, reiterating his now regular position that it was “up to the Libyans to decide on the way forward”.

In a bid to ensure HoR consensus on dialogue, Kobler was to fly to Tripoli to see the numerous HoR members now based there who generally support the Presidency Coucnil and who were not present at yesterday’s vote.

“The first problem is the unity of the HoR,” Kobler told reporters following his conference with Saleh. Speaking of his apparently “very close relationship” with Libya’s parliament following a meeting with HoR president Ageela Saleh in Torbuk, Kobler added it was crucial that the names of those in the HoR’s dialogue delegation be agreed promptly.