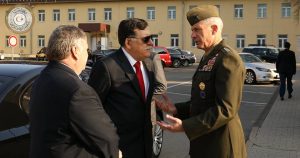 In Stuttgart, AFRICOM’s base, both sides looked at how the US and its new administration could support Libya, in particular o combatting terrorism and preventing the reemergence of the so-called Islamic State (IS).

Serraj expressed his gratitude to Waldhauser for US support during the liberation of Sirte when PC-backed forces ousted IS militants from the town.

Both sides discussed the possibility of the US aiding Libyan military efforts via training and “information exchange.”

Waldhauser reiterated the standard US line that it remained supportive of Serraj and his government of national accord.

Serraj has previously visited Stuttgart for talks with Waldhauser before, in August last year. That meeting touched on similar topics, including combatting IS developing Libyan defensive capabilities, military training and information exchange.