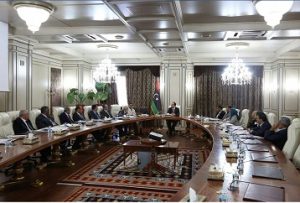 The LBC  has condemned the lack of transparency in the opening of LCs by the GNA for the second year running.

The head of the Tripoli-based Libyan Businessmen Council, Abdalla Fellah, the only Libyan business council recognized under existing Libyan law, has condemned the Central Bank of Libya for hurriedly opening documentary letters of credit for a number of Libyan companies – in order to import ample supplies of foodstuffs in time for Ramadan.

The fasting lunar month of Ramadan starts in the last week of May this year, and, much like the Christmas period, is a peak demand and consumption month for foodstuffs.

Fellah was reacting to the announcement by the Serraj-led Government of National Accord (GNA) Wednesday after holding its second Cabinet meeting in Tripoli. The designated GNA announced that it had approved a total of US $ 10.9 in the form of LCs and Cash-Against-Documents credit facilities specifically for the import of essential foodstuffs and other goods needed for the month of Ramadan

The $10.6 bn import facilities are expected to be granted by the CBL at the official exchange rate of LD 1.4 / dollar plus the 110 percent import levy, which would price the dollar at LD 2.94 / dollar. This contrasts markedly with the black market dollar rate of just under LD 7 / dollar.

The GNA also revealed that it had also set up a committee in order to monitor the distribution of goods and to counter smuggling activities. It also announced that it was to activate the ban on the export of locally produced as well as imported goods. It stressed the need to counter the smuggling activity of goods from Libya into neighbouring countries that was ‘‘threatening the Libyan economy and its national security ‘’.

However, with the huge differential between the official and black-market exchange rate, it is unlikely that these in effect subsidised goods will stop leaking out of Libya.

The decision taken at the GNA meeting came on the back of the Tunis meeting on economic reform and GNA funding last week which included the CBL and Audit Bureau.

The Libyan Businessmen Council head Fellah was very critical of the process and lack of transparency involved in the opening of the LCs.

‘‘The same mistakes and excesses if not the same thefts and crimes that occurred in the previous (fasting) month of Ramadan are repeated this year under the pretext of the urgent need of basic materials (mainly foodstuffs)’’, he explained to Libya Herald.

And these LCs were opened ‘‘quickly and for the same companies without informing anyone and in the utmost secrecy and with the utmost speed came the proposals of the CBL and its proposal to the companies supplying. And the blessing of the Presidency Council and the Audit Bureau, which if the news is correct, they opposed this move last year’’.

Fellah was also critical of how many companies were not able to get these preferential rate LCs which he saw as limited to certain companies. ‘‘How were these companies selected and where is the role of the private sector and Libyan businessmen who do not happen to have special relations with CBL staff and Libyan industry. Is there any answer from the CBL, Presidency Council or Audit Bureau?’’, complained Fellah.