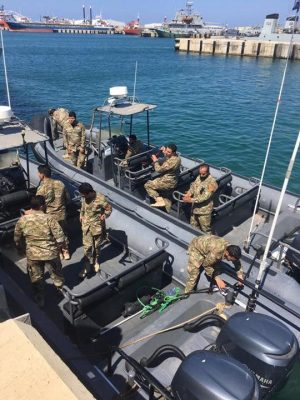 The Fuel Crisis Committee, originally established by Tripoli municipal council in 2015 to find solutions to the shortage of fuel in the capital, yesterday launched what is being called “Operation Mediterranean Storm” to counter the smuggling of Libya’s subsidised fuel by sea.

It is being undertaken in collaboration with air force and navy units backing to the PC.

The committee since reports that, at as result, six vessels believed to have been involved in smuggling sped off near Zuwara fearing they would be attacked.

The same committee, which also operates in conjunction with the National Oil Corporation, has already been working to try to block fuel smuggling by land to Tunisia. In January, this led to angry protests at the Ras Jedir border crossing and the Tunisian town of Ben Guerdane in January.

In an indication of a growing antagonism in Libya to the international community as well as to the press, the committee has meanwhile decided to restrict news about its activities. It will appear only on its Facebook page. The move, it says, is to prevent the media having access to the operation, describing it as hostile, especially the foreign press.

Meanwhile in a separate development, the Libyan coastguard supported by the UN-backed government shot at a boat allegedly belonging to migrant smugglers yesterday.

Spokesman Ayoub Qassem told Reuters that four suspected smugglers were killed in an exchange of fire with the Libyan coastguard off western Libya. A German journalist embedded with the coastguard was also said to have been hurt, although a colleague described the wounds as not severe.

(Initially, we reported that the Fuel Crisis Committee has been set up by the Presidency Council. This was a mistake and we apologise for the error: Ed)