PC must be in charge of oil and NOC, French PM says in talks with Serraj 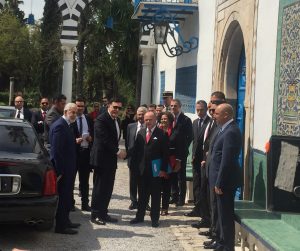 French Prime Minister Bernard Cazeneuve has sided with the Presidency Council (PC) in its dispute with the National Oil Corporation over its independence, saying today that the PC was the only body that could be in charge of oil and of the NOC. Speaking in Tunis today following talks with PC head Faiez Serraj, he also said that all income from oil sales had to go to Central Bank of Libya in Tripoli.

Twelve days ago, the PC not only effectively abolished the oil ministry but also appropriated some of the NOC’s key responsibilities, including the right to decide pricing of oil and gas, which effectively means control over sales. The move has created a row in Libya with NOC chairman Mustafa Sanalla insisting that the PC has no right to make the change and demanding that it retract it.

Two days prior to the PC decision, the ambassadors to Libya of the five permanent members of the UN Security Council, including France, had said that Libyan oil had to remain under the “exclusive stewardship” of the NOC.

Today, speaking of France’s “full support” for the PC, Cazeneuve also insisted that all military forces in Libya had to be under civil control.

He also called on Libyans to pursue dialogue based on the Skhirat agreement and it should be undertaken in a spirit of compromise. The international community, too, had to “redouble” its efforts to help find a solution to the Libyan crisis, he said.

For his part, Serraj, thanking the French government for its backing, said that he and Cazeneuve had agreed that there could be no military solution to the Libyan crisis, only a political one.

He also said they had spoken about the needs of the planned presidential guard, as well as the migrant issue.