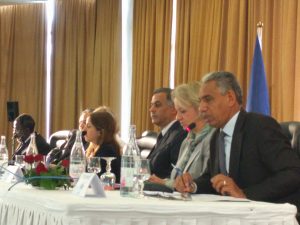 The EU is to increase its support for health and education in Libya following the conclusion of a two-day inter-ministerial conference in Tunis today.

On the health front, the EU is to start work next month on the launch of primary healthcare pilot clinics in Tripoli, Benghazi, Zliten and Gharyan. This is part of a $10-million EU-funded programme on healthcare service delivery.

It will focus on maternity and obstetrics, paediatrics, mental health, non-communicable diseases, and haematology, EU’s ambassador to Libya Bettina Muscheidt said. This will also include a cancer register.

In a separate budget, $6 million has been set aside for the resumption of projects stalled in 2014 as inter-militia fighting wreaked havoc across Libya. These focus mainly on the reform of the way the health service in Libya operates.

“We are back on track and have a clear timeline now,” Muscheidt added.

She described the discussions as “positive, constructive and concrete”.

The various projects will also support the training of health ministry staff and visits abroad.

“We focused on how to ease the suffering experienced by Libyans. We want to provide a remedy and hope the EU will implement the projects agreed,” Nureddin Mazen, a top official at the foreign ministry in Tripoli told the Libya Herald.

“The EU will continue to stand by Libya in this time, but we still need more material support however,” he added.

In the education sector, Muscheidt said particular attention had been paid to the “physical reconstruction” of facilities, especially the universities of Sirte and Benghazi. Maintaining buildings and apparatus to ensure effective study was critically important, both EU and Libyan officials insisted.

Mazen said the universities of Sirte and Benghazi, badly hit by recent fighting, were ‘in dire need of help and refurbishment”.

Increasing Libyan students’ access to scholarship grants and opportunities to study in Europe was also looked at.

Muscheidt said the EU was developing programmes that encouraged the entire education sector. She cited an online business course that had received 800 subscribers overnight as a “huge bonus and great example of what can be done”.

In cooperation with UNICEF, the EU is also to “explore opportunities to support school rehabilitation, the review of curriculum of primary and secondary education, and training of teachers.”

The past two days events follow the first inter-ministerial meeting held in Tunis in December 2016. More than 50 Libyan delegates from the ministries of foreign affairs, planning, local government, health and education attended, together with EU representatives as well as experts and practitioners across Libya.

An inter-ministerial conference focused purely on education in Libya is planned by the EU for after Ramadan.