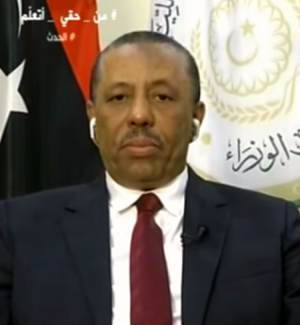 The prime minister of the Beida-based interim government recognised by the House of Representatives (HoR), Abdullah Al-Thinni, has rejected the repeated view of international leaders as well as the Presidency Council that there can be no military solution to the Libya crisis, only a political one. He has insisted that the divisions in the country will be resolved only by military action.

Speaking on Hadath TV on Thursday evening, he called on the country to unite behind Field Marshal Khalifa Hafter and the Libyan National Army, adding that they provided Libya with the only chance of survival against the various militias, the Muslim Brotherhood and those who served foreign interests.

“I belong to the military establishment and I am proud of it,” he stated, referring to his army career prior to the Libyan revolution.

He added that an emergency committee chaired by himself had been set up to deal with  the various problems facing the armed forces and he would be having regular meetings with Hafter on the subject.

Thinni also claimed that in partnership with Major-General Abdul Razzaq Al-Nazhuri, the east’s military governor from Derna to Ben Jawad, he would be organising reforms and improvements to municipalities within the area. In Benghazi, he said, there would be a programme of reconstruction, supervised by the eastern Central Bank of Libya (CBL) governor Ali Habri.

On financial irregualrities, he said that shops charging high food prices would be forced to lower then ahead of Ramadan and that there would be investigations into those in government departments suspected of corruption.

Thanking House of Representatives President Ageela Saleh for his cooperation with his government, Thinni again stressed that the parliament was the sole legislative body in Libya.