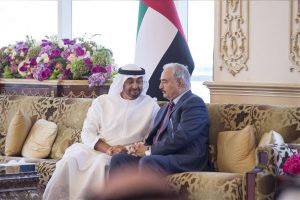 The prince, who is deputy supreme commander of the UAE armed forces, was speaking during a visit to Abu Dhabi by Field Marshal Khalifa.

Expressing his appreciation for the role played by the LNA in fighting terrorism, which he called was a “disease” affecting the entire region, he spoke of the “co-ordination” between his country and Libya in fighting  terrorist organisations. He added that the UAE would continue its efforts to unite Libyans and support their efforts to combat such extremism.

The crown prince and Hafter, who is expected to remain in the UAE for several days, also discussed ways of strengthening and developing relations between the two countries.