A downbeat Kobler reports to the UN Security Council 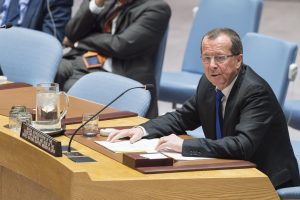 UNSMIL chief Martin Kobler has told the UN Security Council in New York that Libyans are no longer clear about their future.

The normally upbeat Kobler admitted that the optimism that followed the December 2015 signing of the Skhirat agreement in Morocco had faded: “Instead I see frustration, disappointment, sometimes anger and often it is justified”.

What he described as the sharp horizon created by the Libyan Political Agreement (LPA) had been blurred and the path forward was no longer clear for many.

“Today,” he said, “uncertainty has contributed to fragmentation and dissent, contributing to a dangerous political power vacuum. Violent clashes, social unrest, increasing criminality remain common in too many parts of Libya.”

Kobler warned that though the so-called Islamic State had been defeated in both Sirte and Benghazi, the major risk came now from internal conflict and the growth of militias in the continuing power vacuum. History, he said, did not tolerate a vacuum. Armed groups were now gaining power. The consequence was that Libya was seeing new and heightened violence.

He said that as a result of division, public services including access to electricity, water, health and education were being denied to many Libyans.  And he made it clear that the economy was tanking. Gross Domestic product had halved in five years. “The lack of liquidity prevents Libyans from accessing their salaries. The dinar is losing value. The shadow economy and rampant corruption are growing. ”

Reflecting the international community’s mounting frustration at the stand-off between the Presidency Council (PC) and the Central Bank, he urged more constructive cooperation between financial and economic institutions and the PC .

Kobler also warned that political divisions also threatened the cohesiveness of the Central Bank, the National Oil Corporation and the Libyan Investment Authority. As a result it was difficult to produce a realistic common budget for the whole country.

The UNSMIL chief yet again stressed that the LPA was the only option but was open to amendment by Libyans.

“If the parties do not uphold their responsibility in the Libyan Political Agreement, there is no reason to think that they will have any greater commitment to an alternative agreement.”

He said that all important stakeholders were committed to the LPA including Khalifa Hafter and House of Representatives (HoR) president Ageela Saleh.

He explained: “The Prime Minister, [Faiez Serraj] the President of the House of Representatives both confirmed their commitment, as did the Commander of the Libyan National Army, Field Marshall Hafter, during our meeting last Thursday in Benghazi. The Head of the State Council [Abdul Rahman Sewehli ] expressed his agreement, as have almost all representatives of significant institutions and constituencies.

Kobler also told Security Council members of his worries over violence in the south. “Efforts to expand control through violence are short-sighted and counterproductive. I am particularly concerned about developments in southern Libya, both military and humanitarian. The much-neglected South just cannot take more. There will be no unity through violence. Parties need to step back, and talk.”

He also urged more active engagement by the international community and appeared to take a swipe at the minor industry of offshore conferences and symposia that has grown under the auspices of NGOs, the EU and the UN itself. What was needed he said were “Action and commitment, not only papers and meetings and workshops.”

He said: “Having worked on Libya since the signature of the Libyan Political Agreement, I am convinced that Libya will not solve its problem alone. It needs strong, united, consistent, robust and concrete support of the international community. ”

But this he stressed had to take the form of partnerships not interference.

In what appears to be a subtle but potentially important shift of emphasis, Kobler said that UNSMIL would shortly be starting to work with elected local authorities which had demonstrated their ability to mediate local ceasefires that had, he said, prevented many sparks from creating fires.

“Libyans will soon start a comprehensive bottom-up national reconciliation initiative supported by UNSMIL”. The plan would be for public services and governance to be improved at local levels.

“In a country with a legacy of weak national institutions, local authorities remain among the most respected and effective actors.  We must support them.  Democratically-elected mayors must be given authority, funds and responsibility. ”