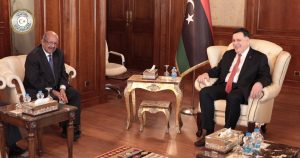 He then returned to Tripoli for talks with Presidency Council (PC) head Faiez Serraj and his deputy Ahmed Maetig.

Messahel’s has been in Libya this week leading Algerian efforts to mediate between the various factions in the country. He arrived in Misrata yesterday from Tripoli, having previously visited Zintan, Benghazi and Beida.

Throughout the trip, he stressed the point that Libyans have to resolve the crisis themselves and have to do so by talking to each other. A PC statement today said Messahel had also repeated to Serraj Algeria’s core belief of no outside interference in the country’s affairs, again saying he firmly believed Libyans could solve their problems collectively and internally.

In a separate meeting with Maetig, he repeated that Algeria would continue to offer its support, especially in the fight against terrorism he added.

Yesterday, before heading to Misarta, Messahel met State Council President Abdulrahman Sewehli. Bringing together the State Council and House of Representatives so they could reach a compromise on the Libyan Political Agreement was of key importance, he said.

The efforts of Libya’s neighbours to help broker dialogue were also looked at and the necessity of a political solution, not a military one, was underlined. Sewehli thanked Algeria for its efforts to restore stability in Libya. 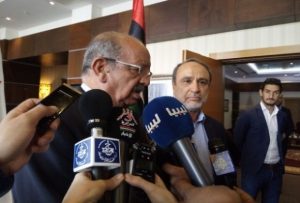 In Zintan also yesterday, Messahel said he was the “bearer of a message of hope” from Algeria and stressed the importance of ridding terrorism from Libya. The message in the mountain town was likewise that there could be no solution to the crisis without dialogue.

“Dialogue has to bring together Libyans and has to take place in Libya and not abroad. Only Libyans can build their country’s future,” he added in a speech attended by community leaders.

Meanwhile, it has been reported in Algiers that Algeria will host the 11th meeting of Libya’s neighbouring countries next month as part their efforts to find a political solution to the Libyan crisis.