Breakthrough meeting in Rome between Ageela Saleh and Abdulrahman Sewehli 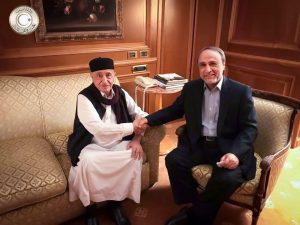 The presidents of the House of Representatives, Ageela Saleh, and the State Council, Abdulrahman Sewehli, met today in Rome and agreed to work together to resolve the Libyan crisis.

According to a statement from the State Council, “there was an atmosphere of friendliness and openness” at the meeting.

The statement also said that there would have to be further consultations between the two sides in order to bring about reconciliation “and stop the bleeding as well as [ensure] the return of displaced persons”.

With the HoR refusing to approve a government of national accord until changes are made to the Libyan Political Agreement, which can only be done by a joint team from the HoR and the State Council, the meeting marks a potential breakthrough in the current crisis.

Both bodies still have to appoint their dialogue teams. Earlier this week, the Libya Herald was told by HoR sources that appointing the parliament’s team would be left to Saleh on the basis that a decision would take too long if left to members to decide.