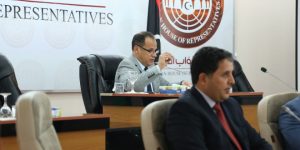 The HoR listened to the presentations of the new candidates for the post of the Governor of the CBL today (Photo: HoR).

Three out of the four candidates shortlisted for the post of the Governor of the Central Bank of Libya (CBL) made their formal presentations for the job to the House of Representatives (HoR) in Tobruk today, the HoR reported.

The four on the final shortlist were Ahmed Rajab Mohamed, Mohamed Abdulsalam Shukri, Abdelhameed Alshaikhy, and Ali Hibri. The present incumbent, Saddek Elkaber, whose term had expired,  was not shortlisted by the HoR.

Hibri was not present and nor did he make a presentation. He is of course the current de facto head of the CBL in Beida  – representing the east – and had been the Deputy Governor of the unified CBL in Tripoli prior to the split of the CBL post 2014.

There were 98 members present at today’s session, which was presided over by the Second Deputy Emeed Huma. Tomorrow, the HoR is scheduled to vote on the candidates.

It is unclear, however, if the HoR would be able to impose its new appointment on Tripoli where the head of the High State Council (HSC), Abdelrahman Swehli, has announced that any new appointment of a CBL Governor must be made in agreement with the HSC – as prescribed by the December 2015 Skhirat Libyan Political Agreement.