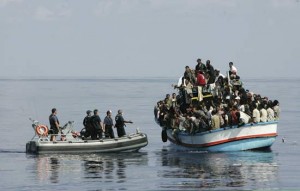 The EU took a closer look at what is needed to disrupt the people-traffickers’ business model when two senior Libyan officials visited Brussels today.

The Libyans from the National Migration Team and the Coastguard discussed being given access to EU analytical data, while the Europeans in their turn sought to establish information channels to the interior and defence ministries in Tripoli.

Brussels appears to be concerned that it will be talking to the right people and that data it provides will remain secure. This February a leaked EU report claimed that the interior ministry was infiltrated “by militias and religiously-motivated stakeholders” and that the defence ministry had little or no control over the armed forces.

After today’s meeting Maciej Popowski an EU commission deputy-director told the EUobserver: “We are dealing with two coastguards, one reporting to the ministry of interior, the other one to the ministry of defence. We are trying to engage with both.”

The Europeans want Libyan support for its Operation Sophia crackdown on people smugglers. The Italians have begun delivering ten fast patrol boats to the coastguard. Brussels this month gave €90 million for migrant projects, half of which will be going to analysis of smuggling operations and half toward the better care and upkeep of captured migrants now held in  Libyan detention camps, which have been widely criticised for their inhumane conditions.