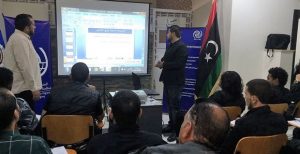 For the first time in three years, the International Organisation for Migration (IOM) has held training sessions inside some of Libya’s migrant detention centres on the of migrants’ human rights.

With human rights violations seen as widespread in many of centres, the IOM intends to bolster the capabilities of staff as well as improve migrant living conditions.

In its initial pilot project, funded by the UK, the IOM has focussed on five places: three in Tripoli (Abu Sleem, Triq Al-Sikka and Airport Road), and at Khoms and Gharyan.

It is the first time since 2014 that the IOM has been able to provide training at detention centres in Libya. It is being carried out with the assistance of IOM staff by the centres’ management who themselves took part in a training course in Tunis in F ebruary.

The first two training sessions, just over a week ago involved 24 staff at the Tariq Al-Sekka centre and and 28 at Abu Sleem.

“It is a great step to be able to restart the trainings inside detention centres in Libya,” programme manager Maysa Khalil said.

“Even though IOM advocates for the release of detained migrants, this type of human rights trainings aims at long-term improvement of the living conditions for migrants currently inside detention centres,” Khalil added.

“It is important to build a good relationship with the migrants who are residing in the centres in order for them to feel safe,” Mohamed Salem, who works at Triq Al-Sikka, said.

Whilst only a pilot project, the IOM says it intends to expand it to the 30 other detention centres spread across the country.