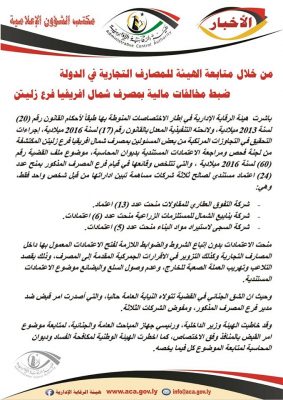 Zliten’s Bank of North Africa branch is to be investigated by the Administrative Control Authority (ACA) in Tripoli over claims of financial irregularities. It is alleged that the bank branch granted 24 Letters of Credit (LCs) to three companies owned by only one person.

The ACA suggests the companies’ owner and the branch’s manager colluded to obtain US dollars at the Central Bank of Libya’s (CBL) formal rate, which is $1 is to LD 1.41 so they could then resell the on the black market. The black market rate is currently $1 to 7.1 Libyan dinars.

Of the three companies, one is reportedly involved in construction; it obtained 13 LCs. The second, with six LCs, deals in agricultural equipment, and the third, with five LCs, imports building materials. The owner’s name has not been disclosed by the ACA.

The LCs were issued without the normal investigations adopted by commercial banks to prevent fraud prevention, the ACA added.

The ACA has called for arrested warrents against the bank manager and company owner to be issued by the public prosecutor.

Meanwhile, Central Bank of Libya (CBL) in Tripoli has announced the relaunching of LCs for companies importing basic foodstuffs such as meat, tuna, dairy products so locals can stock up ahead of Ramadan.

At present almost all foodstuffs other than subsidized staple products such as flour and oil, have to be imported using the black market to obtain hard currency. It has lead to fears that the dinar-dollar rate with rise even further by the time Ramadan begins.

“We are telling residents that the CBL intends to provide them with basic food during the holy month of Ramadan with the cooperation of the related authorities in the country, including the Government of the National Accord,” the bank stated.

The CBL slashed the granting of LCs after last Ramadan.

“If the crisis continues, it will deepen the gap between the rich and the poor, and deeply damage the middle class,” financial expert Tarek Al-Alem told the Libya Herald.

“This has started already. Some people can no longer afford many types of products and are limited to only the cheapest goods,” he explained.

A solution to the problem required a strong political will, social solidarity and security stability, he added

“To be honest, practically none of these things are going to be implemented, at least in the short term,” he said.