One of Qaddafi’s top officials has been appointed by the president of the House of Representatives, Ageela Saleh, as his adviser for Maghreb affairs.

Mohamed Belgassem Zway was the last Secretary-General of the General People’s Congress from early 2010 till the revolution a year later. He was then arrested and put on trial for his involvement with the Qaddafi regime. In June 2013, a court found him and fellow defendant former Qaddafi regime foreign minister Abdulati Al-Obeidi not guilty of the main change against them: maladministration. But he was then arraigned on other charges and in July 2015 sentenced to 12 years’ imprisonment. A year later, he and a number of other Qaddafi-era figures were finally freed on health grounds.

Zway is said to have been a close, personal friend of Qaddafi, having been at school with him in Sebha until Qaddafi was expelled. It is also claimed that it was he who introduced Qaddafi to the man who served as his deputy for almost two decade, Abdessalam Jalloud.

So far, there has been no reaction to the appointment of the most senior Qaddafi official to date to a senior state post. 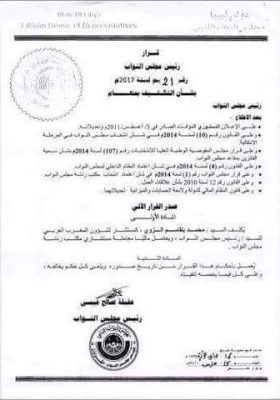