Presidency Council (PC) head Faiez Serraj says he remains convinced of the importance of Italy’s role in finding a political resolution to the Libyan crisis. He was speaking by phone call with Italian foreign minister Angelino Alfano today.

He welcomed the Italian initiative that brought together House of Representatives President Ageela Saleh and State Council head Abdulrahmen Sewehli in Rome. The two chambers are now recognised nationally and internationally as constituting the national dialogue. Under the Libyan Political Agreement (LPA), it can only be amended by proposals hammered out by teams from both bodies.

“We cannot allow Libya to fall back into chaos because of the fallout this would have in terms of terrorism and human trafficking,” Alfano said is reported to hve told Serraj.

He reassured the PC head that Italy remained fully supportive of the LPA and the importance of the PC in establishing state institutions.

“The solution to the crisis can be nothing other than political,” said Alfano, adding that “dialogue represents the only viable way out”, and that “Italy will bring forward its action to foster peace in the country”.

Italy was the first country to reopen its Tripoli embassy and celebrated 100 days in the Libyan capital yesterday through the social media craze the ‘Mannequin Challenge. 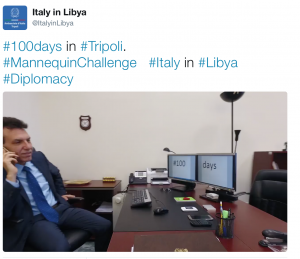 Sewehli says it is time for Tawerghans to return home