The National Oil Corporation (NOC) and Eni North Africa have announced the discovery of a new offshore gas and condensate reservoir some 140 kilometres northwest of Tripoli after drilling a well in Block NC41 in the Sabratha Basin.

The discovery, at Well B1-16/3, is five kilometres north of the existing Bahr Essalam Gas field. The well was drilled in a water depth of some 150 metres and, according to NOC, reached a total depth of 2,981 metres.

It is thought that the new well be linked to the existing Sabratha platform operated by the NOC/Eni joint venture Mellitah Oil & Gas. 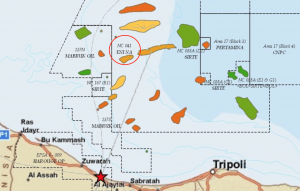 Production again at 660,000 b/d as Sharara field back on stream