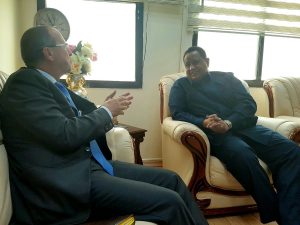 Kobler condemned the use of rebel militias and cited international law banning armed groups from operating outside their own country.

In their talks, Sudan once again threw its weight behind the UN-backed Presidency Council and its administration, describing it as the “legitimate Libyan government.”

Ghandour said the administration of Presidency Council leader Faiez Serraj needed more support from the international community. Both sides agreed that only a strong government could bolster Libya’s security and economy.

Illegal migration was also looked at, with many migrants coming from Sudan or passing through its territory on their way to Libya.

Both countries had agreed in November 2013 to deploy joint forces to secure the border but instability in Libya has made this impossible.

The border was also one of the main points of discussion in talks between Kobler and the Sudanese chief-of-staff Lieutenant General Imad-Eddin Adawi.