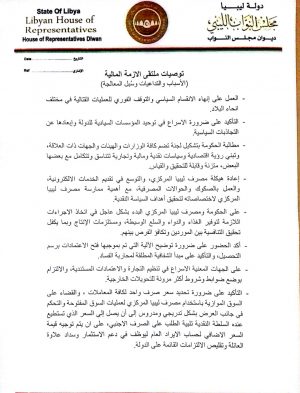 The leading entities concerned with the Libyan economy, including Presidency Council head Faiez Serraj and western-based House of Representatives (HoR) members, met in Tripoli on Monday to find some solutions to the current financial and economic problems the country is going through.

Organizers reported that the meeting included the HoR Finance Committee, the Government of National Accord’s (GNA) Finance, Planning and Economy Ministries, the Tripoli-based Audit Bureau, the Tripoli-based Administrative Control Authority, the Economy Committee in the High State Council, the Economic Development Council and the General Union of Chambers of Commerce and Industry.

Conspicuously, the most important Libyan financial entity that was not present at the meeting, however, was the Central Bank of Libya.

After opening interjections by Faiez Serraj and all of the above, a number of economists and academics were also invited to contribute to the debate under the banner ‘’ The negative effects of the liquidity crisis and the fall in value of the Libyan dinar on the national economy and standard of living on citizens and mechanisms to exit this crisis’’. 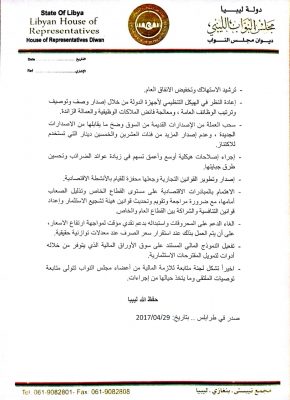 At the end of the event the Western-based HoR members released (on HoR headed paper) the following 17-points of recommendations:

It must be pointed out that whilst the Western-based HoR members were responsible for the release of this list of recommendations, it is not clear to what extent it fully reflects in detail the views of Faiez Serraj and his PC. The PC did release a standard press release on their media platforms announcing Serraj’s participation – but it lacked any detailed economic programme of action as the one above.

It must also be noted that the views of the Western-based HoR members do not reflect the views of the leadership or the main body of the HoR in Tobruk. Indeed, Tobruk does not sanction any type of HoR meeting held in Tripoli.

Finally, the big elephant in the room is the conspicuous absence of Saddek Elkaber, the Governor of the Tripoli Central Bank of Libya from the meeting. Elkaber, as the latest Audit Bureau report explains,

in the absence of a performing legislature as a result of Libya’s political split, seems to be untouchable.

Only the CBL can devalue the Libyan dinar and it is the CBL that has taken it upon itself to decide how much money it loans out to incumbent governments operating on deficits. The CBL has self-appointed itself the guardian of Libya’s fast depleting foreign currency reserves – without any accountability to any other Libyan entity.