Libya’s political division is root cause of its economic crisis: Audit Bureau 2016 report 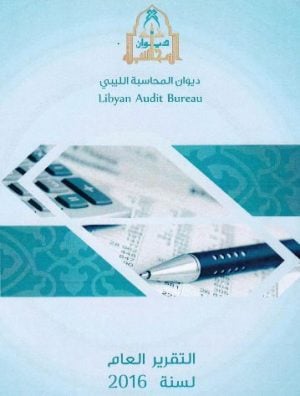 The Tripoli-based Audit Bureau says in its 2016 Annual Report that Libya’s political division is the root cause of its economic problems (Photo: Tripoli Audit Bureau).

The underlying cause of Libya’s economic problems in 2016 were caused by the political division of the country. This division had led to the existence of multiple contending governments and central banks – and contending monetary policies.

The assessment was made by the Tripoli-based Audit Bureau in its 623-page 2016 Annual Report released on 26 April.

Reviewing the 2006 ‘’budget’’, the Audit Bureau noted that the sources of the 2016 effective budget and state spending (unapproved by Libya’s legislature the House of Representatives in Tobruk) was 30 percent or LD 8.8 bn from oil, tax, telecoms and fuel sales revenues. The balance of LD 26.6 bn, the70 percent deficit of LD 21 bn, was made up through a Central Bank of Libya (CBL) loan.

The Audit Bureau attributed the failure of Libya’s economy mainly to the ‘‘political division’’ between west and east Libya. This division had led to ‘‘multiple governments’’ (the House of Representatives (HoR) recognized Interim Government in Beida, Salvation Government in Tripoli and the only internationally recognized Government of National Accord (GNA) and ‘‘multiple monetary authorities’’ (the internationally recognized Central Bank of Libya in Tripoli and its HoR recognized contender in Beida) has led to the failure in finding solutions to the country’s economic and monetary problems.

It pointed out that the two CBLs were more interested in ‘‘pleasing the authorities they deal with..at the expense’’ of citizens and Libya.

These underlining causes of the country’s economic problems were compounded by the port closures restricting oil production and state oil revenues, rampant corruption by individuals, entities and banks and the lack of security in the country.

The Audit Bureau noted that the belief by Libyan citizens in 2016 that the situation in Libya will not improve soon had led to a loss of confidence and to the hoarding of money. This in turn led to the country’s liquidity crisis and bank queues.

The pumping of more cash into the economy by both banks has led to increased demand for foreign currency for overseas spending/transfers and hoarding – due to the lack of confidence in the Libyan dinar. This resulted in increase of the dollar black market exchange rate against the dinar. The CBL has been unable to meet the demand for hard currency by the Libyan market. The huge rise in the black market exchange rate of the US dollar and insufficient supply to meet demand has had the knock-on effect of inflation and price rises in goods in the domestic market.

The solutions to Libya’s acute economic and monetary problems, the Audit Bureau states, are one unified Libyan government so as to enable the implementation of exceptional policies needed in this period. Libya also needs one CBL implementing unified monetary policies.

Libya also needs to increase its oil production to previous levels and to put in pace spending cuts by the state, including reducing credit and loans, so as to decrease money supply. The authorities also need to put in place incentives to encourage citizens to deposit cash in banks. This could be through the withdrawal of old bank notes in circulation, the temporary devaluation of the dinar or incentives for deposits (Note banks are not allowed to charge or pay interest which is deemed in violation to Islamic Sharia law).

The Audit Bureau also suggested the further encouragement of the use of debit cards, POS and other types of electronic payments methods. It also suggested the supply foreign exchange in an organized and balanced manner. Currently, the widely held Libyan public perception is that foreign currency distribution is monopolized by a few black market traders who are corruptly in league with some bank employees.

However, the Audit Bureau says that if Libya’s political division continues, no policies or reforms or exceptional measures will succeed in solving Libya’s economic problems. It gives the example of the Beida-based Interim Government’s decision of printing LD 4 bn in new bank notes in Russia and its borrowing of LD 12 bn from commercial banks as a case in point.

The continuation in printing and circulating new money notes without withdrawing old notes due to the political division of the country will lead to an increase in Libya’s economic crisis, the Audit Bureau added. Neither of the two contending CBLs can impose any of its monetary policies as neither has control over all of the bank branches across the country – due to the political division.