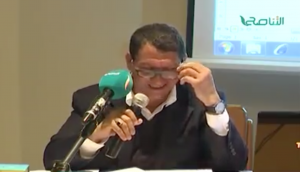 Women cannot be trusted to hold positions of responsibility because, if pregnant, they will have irrational cravings, a boycotting member of the House of Representatives has claimed.

Abderraouf Al-Manaie, one of the two members to represent Tripoli’s Abu Sleem district and who is seen as being close to the Muslim Brotherhood, told Tanasuh TV that a women as president would be dangerous because if she became pregnant she might start having crazy cravings.

“What would we do if a female president gets into a daze because of her pregnancy and orders, for example, a war against Tunisia?”, he asked.

Manaie has courted notoriety in the past. Although elected to the HoR, he has virulently campaigned against it and never joined it, declaring it illegitimate. In late 2015 when the former General National Congress was proclaiming itself still in existence, he became one of its president Nuri Abu Sahmain’s prime cheer leaders,

At one point – allegedly – he physically prevented a number of members from entering the GNC’s hall because of fears they would vote for a replacement as well as recognise the then proposed government of national accord. A couple of months earlier he was reported to be among those who stormed the GNC when it had the audacity to discuss a draft of what became the Libyan Political Agreement.

Tanasuh TV, owned by Sheikh Sadek Al-Ghariani’s Dar Al-Ifta, is itself not without notoriety. This week, another HoR boycotter, Misratan member Hanan Shaglouf, suggested in a programme of the current reported wave of suicides that they might be due to the “sweet smell” of the bodies of the “martyrs” in Benghazi’s Ganfouda district causing shock and depression.

Sweet smells, she claimed, could cause shock.

Most of the suicides have been in Beida, some 175 kilometres from Benghazi.