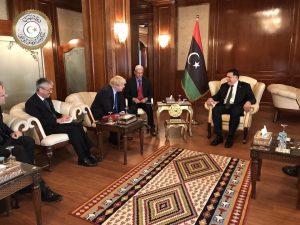 He called on them to “seize the momentum” following the Abu Dhabi talks between Serraj and the Libyan National Army’s Field Marshall Khalifa Hafter.

Johnson’s visit is his first and the first by a senior British politician since his predecessor, Phillip Hammond, went to Tripoli last April just after Serraj and the PC arrived there.

According to a PC statement, the Serraj-Johnson talks covered a number of areas of potential cooperation, notably education and scholarship programmes for Libyan graduates in British universities and educational institutions, but also energy, healthcare and infrastructure projects.

Johnson himself said that “security, stability and prosperity can only be achieved when the country’s leaders choose to get together and work out a plan for the common benefit of the Libyan people.

“Establishing effective governance is also the key to defeating terrorism in Libya and countering illegal migration,” he added.

While political discussion took up much of Johnson’s day he still found time to visit the Marcus Aurelius arch in Tripoli, accompanied by Siala and British Ambassador Peter Millett.

In his talks with Sewehli, the latter told him that certain countries in the region needed to start playing a more positive role and support the Libyan Political Agreement in order to prevent further violence.

The Libyan Dialogue had to be expedited to bring stability, he added.

Serraj returned yesterday from successful talks in Abu Dhabi with Hafter. The British Foreign Minister, who today also stressed the UK’s support for the Presidency Council, has previously said that Hafter had to be integrated into the Libyan government.

Siala was in London last week although he did not see Johnson. Instead he met with the Under-Secretary of the UK’s Foreign Office, Simon McDonald.

Johnson then flew to Tobruk for talks with House of Representatives (HoR) president Ageela Saleh, and a handful of HoR members, despite UK diplomatic sources saying that he he would not do so.

Johnson, for the Tobruk visit by Ambassador Millett, was again encouraging of the Hafter-Serraj Abu Dhabi meeting and, as in Tripoli, urged Saleh and other eastern politicians to move forward and take the initiative.

He later laid a wreath at the Commonwealth World War II cemetery. 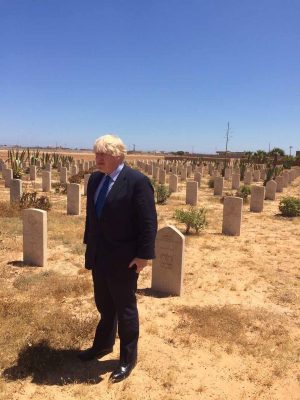