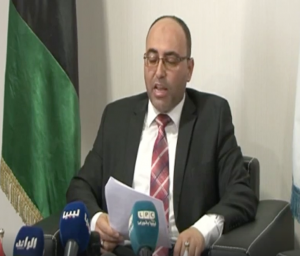 The Mayor of Misrata was forced to resign last night by protestors who forced their way into a building where he was having a meeting. He subsequently announced that the resignation was not effective because he had been forced to act under duress and that he would continue in his role as per usual.

Mohamed Eshtewi was holding a meeting with Bunyan Marsous representatives and Sirte mayor Mukhtar Al-Madani when protestors stormed the building at around 8 pm last night.

Unconfirmed reports say gunshots were fired and Eshtewi released a statement on a scrappy piece of paper saying he had resigned.

He was shouted at and pushed and the protestors refused to let him out, although no weapon was ever directly aimed at him

“I had no other choice. I wanted to preserve the safety of those present,” he later insisted.

Eshtewi said his resignation letter meant nothing and asked everyone to ignore it.

“I assure you that I will continue in my job as normal,” he added.

The meeting was held at the Misrata Housing Foundation because the opposition has blocked the municipal building.

Last month, protestors who want to force out the elected mayor and councillors and replace them with a team supporting the city’s military council and hardliners opposed to both Khalifa Hafter and the Presidency Council bricked up the entrance to the municipal council building. A subsequent court order to remove the wall has not been executed; when council workers arrived to knock it down, they were prevented by protestors.