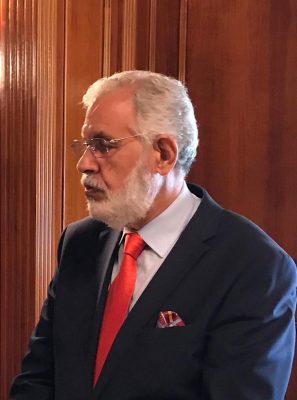 Comments reportedly made in Algiers yesterday by Presidency Council foreign minister Mohamed Siala about Khlifa Hafter, seen as sympathetic to the eastern commander, have resulted in a powerful wave of criticism in Tripoli.

This morning, the Salafist militia in the city, the Nawasi brigade, called on him to resign. This was then followed by the State Council saying it “categorically rejected” Siala’s views. By the end of the day, even the Presidency Council had joined in with a clear rap over the knuckles.

At a press conference yesterday during the Libyan neighbours’ conference in the Algerian capital, Siala was asked about Hafter’s position. He is said to have replied that Hafter had been appointed supreme commander of the Libyan armed forces by the House of Representatives and was therefore the legal head of the Libyan military.

Rejecting this view, the Nawasi brigade said that Hafter’s position was unacceptable because he did not recognise the Libyan Political Agreement (LPA). It called on Libyans to support the 17 February revolution and reject both dictatorship and those looking to rule Libya through repression – a barely disguised allusion to the field marshal.

Taking a similar position, the State Council described Siala’s remarks as incompatible with the LPA and “irresponsible”. He had lost all credibility as a minister, it said, and the Presidency Council should take action against him.

Siala himself remained in Algiers today for the visit there of Presidency Council (PC) head Faiez Serraj. However, the fact that the two were there together did not protect him from a subsequent stiff admonition from Serraj.

In a convoluted and wordy statement clearly designed to calm tempers in Tripoli, the Presidency Council took him to task over his words about Hafter.

While not mentioning him by name, it said that “every official in the government” had to abide by the provisions of the Libyan Political Agreement, warning of the consequence of departing from them. The LPA was the foundation on which the PC’s own power was based, it said. In particular it referred to the importance of dealing with what it called the issue of appointments of sovereign, civil and military posts.

Anywhere else in the world such a admonition would result in an immediate resignation.

Meanwhile reports that the Nawasi brigade had attacked the Busetta naval base which Serraj had used as his headquarters and the nearby foreign ministry in a demonstration of their anger were untrue. There were clashes in the Busetta area involving Nawasi, but they were unrelated to the issue of Siala and his views on Hafter.