Coastguard rescues 300 migrants, mainly North Africans, off Sabratha; get into spat with Sea-Watch 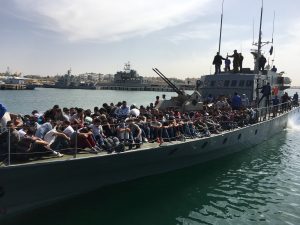 In a new development, the coastguard today rescued some 300 migrants off Sabratha, most of them from North African countries.

In a remarkable change from the usual boatloads of sub-Saharans, the migrants, who were taken to Tripoli naval port, were almost all young men mostly from Tunisia, Algeria and Morocco, although there were some sub-Saharan Africans on board.

In a further development, Qasim claimed that German rescuers Sea-Watch had tried to interfere in the rescue operation. “It tried to take them from the coastguard although the boat was in Libyan waters”, he said.

Given that the EU was helping the Libyan navy prevent migration to Europe, it also demanded that the EU change the policy “immediately” and that there be an independent investigation “into whether European authorities were involved with this return operation”. Returning migrants to Libya was illegal under interational law, it claimed.

Meanwhile there is still no news on the remaining missing 150 migrants feared to have drowned when their boat sank off Zawia on Friday. Some 170 had departed the same day from Maya, west of Janzour. On Saturday, eight survivors were found clinging to wreckage off Zawia. On Monday, the bodies of 11 others, ten of them women and the other a young girl were found on the shore at Al-Mutrad, west of Zawia.

In a separate move, the new head of the coastguard committed himself and his team at a press conference in Tripoli today to try to stop the flow.

“We will try to cooperate with the government and tackle the phenomenon”, said Colonel Mohamed Bishr.

Managing to do so, however, may not be that simple. He has had to base himself at coastguard’s office in the capital’s Railway Road, near the prime ministry building. In depressingly familiar circumstances, his predecessor is refusing to leave the main headquarters on the Airport Road, near the interior ministry.