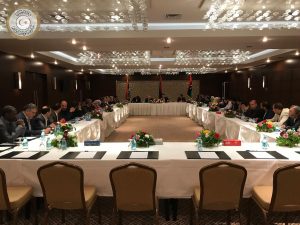 Presidency Council (PC) head Faiez Serraj will meet with Marshal Field Khalifa Hafter in Cairo tomorrow for the second stage of their discussions, usually reliable sources in Tripoli have told the Libya Herald. They said that he had already left for the Egyptian capital and that Hafter had likewise flown this evening from Benghazi’s Benina airbase.

Neither report has been confirmed.

It was widely reported last week after the two men’s talks in Abu Dhabi that there would be a follow-up meeting this week in the Egyptian capital. Although there was no announcement, the two were said to have had discussions with Egyptian President Abdel Fatteh El-Sisi who was in Abu Dhabi at the time.

Meanwhile earlier today in Tripoli, Serraj met some 50 House of Representatives (HoR) members from across the country who support the Libyan Political Agreement and the PC for what were described as “frank and serious” discussions,

These dwelt in particular on his meeting with Hafter.

According to reports, he said that they focussed on uniting military structures in Libya under the control of a political leadership, the situation in the south of the country, and drawing the Petroleum Facilities Guards into a single structure.

He also said that the Libyan Political Agreement had to be basis for future dialogue and agreement.