Festival in Benghazi to mark third anniversary of Dignity operation 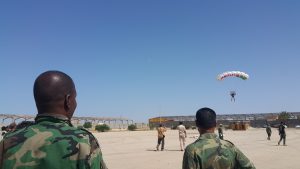 Saiqa Special forces prepare for Monday’s celebrations marking the third anniversary of the start of the Karama operation in Benghazi (Photo: Saiqa)

Celebrations are being organised by the authorities in Benghazi to mark the third anniversary of the start of the Dignity (“Karama”) operation launched by Khaifa Hafter to destroy Islamist militants in the city.

Starting on 16 May and lasting three days, the festivities are being presented in part as marking the Libyan National Army’s victory in having cleared most of the militants out of the city and in part to commemorate those who died in the operation and the suffering endured by the people of Benghazi. They will include military parades, speeches from leading figures officials and well as other events.

The main event, though, will be outside the city, apparently for security reasons.

Foreign media, have been invited to cover the event. Ahead of it, a linked four-day Libyan-Egyptian festival – the Al-Ahram Cultural Festival – is already taking place and early this morning a planeload of journalists and other media personalities landed in Benina Airport from Cairo on a chartered Afriqiyah airbus to take part. The festival has as its slogan “Together, we triumph over terrorism”.

It is still being suggested that the airport will reopen for normal civil flights on 16 May.

The costs to cover all the celebrations are being borne by the Beida government.

In an effort to drum up public enthusiasm, the chairman of Benghazi Municipality’s committee responsible for them, Rajab Musa Al-Jaghdaf has called on residents to hang out flags and decorations and join in the festivities. It was an historic event, he said, and people should take part and make it a success.