Protestors in Bengahzi and Tobruk call for 1951 federalist constitution 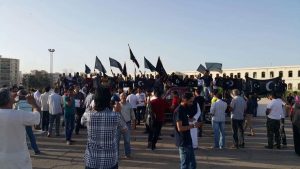 Demonstrator in Benghazi call for the return of the 1951 federalist constitution  (Photo: Social media)

In both Benghazi and Tobruk today demonstrators called for the reintroduction of the 1951 constitution, objecting to the final offering from up by the Constitution Drafting Assembly.

Waving Cyrenaican flags and backing a federal future, the protestors in Tobruk also specifically supported a restoration of the monarchy under Prince Mohamed Al-Rida Al-Senussi, the son of the late Crown Prince Hassan Al-Rida Al-Senussi.

There were pictures of him, his father and King Idris.

Support for the Senussi monarchy remains strong in Tobruk.

In Benghazi, where the military authorities had given permission for the demonstration, a much smaller group – observers and bystanders almost outnumbered them – turned up with black Cyrenaica flags in Kish Square to call for a return to the country’s original federalist constitution.

The CNA’s constitution is republican and rejects federalism.