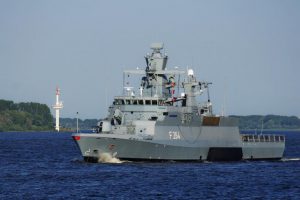 The Presidency Council (PC) has angrily denied that it is in any way connected with an arms shipment intercepted by a German warship a fortnight ago. It has warned the media to be credible and professional and not to fall prey to social media rumours.

The Libyan-flagged motor-vessel El Mukthar was stopped in international waters on 1 May by the German navy corvette Ludwigshafen am Rhein. When boarded and searched the Libyan vessel was found to be transporting a range of weaponry including machine guns, AK47 assault rifles, RPG launchers and grenades, mortar bombs and other ammunition.

The German warship is part of the EU’s operation Sophia. According to the operation’s command, EUNAVFORMED, the weaponry was seized and a report prepared for investigators. It is unclear however what happened to El Mukthar and its crew. No details were given of its port of departure nor where it was heading nor indeed where it was intercepted.

The inevitable social media speculation suggested a range of recipients seeking to break the UN’s Libyan arms embargo. Yet the international community has made it clear that it is prepared to consider requests from the PC for the arming, equipping and training of its new Presidential Guard. Therefore on the face of it, the PC would be the least likely to be seeking outside arms shipments.

Today it put out a statement saying the media should not be lured by false leaks that aimed to sow disruption and confuse public opinion, when the real effort ought to be on intensifying efforts to rebuild the state and save the country from its present crisis.

It insisted: “The Presidential Council affirms that it works through the Coast Guard in fighting against all kinds of smuggling to the best of its ability”.  It added that it was in constant contact and working closely with the EU over smuggling.