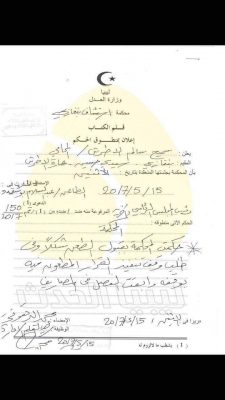 An appeal court in Benghazi has today upheld an appeal by the National Oil Corporation to reverse the Faiez Serraj Presidency Council’s (PC) decision to reduce its powers.

The PC, by virtue of its decree No. 270 (2017), had reduced the powers of the NOC, including its historic powers to negotiate Exploration Production Sharing Agreements (EPSA) with international oil companies. As a result of this reduction of NOC power, German oil giant Wintershall was allowed to keep its high oil production share.

The NOC had said last Wednesday that Wintershall was in breach of a 2010 deal to revise downwards it share of production. It asserted in a statement: “If Wintershall kept to its agreements including seeking a resolution by arbitration, production and exports could continue. Instead, it has tried to interfere in Libyan internal politics and to take advantage of the weakness of the state.”

NOC maintained that in 2010, Wintershall had signed a memorandum of understanding (MOU) which extended its 50-year concession for its two onshore areas  – in return for accepting the EPSA IV terms.

Without this agreement, said NOC, the German firm’s concessions would have expired in March 2016. However, at that time Zuetina was blockaded by Ibrahim Jadhran’s Petroleum Facilities Guard and NOC had declared force majeure, a measure only lifted last September when the LNA ousted the PFG from all the Oil Crescent export terminals, including Zuetina.

NOC had said last Wednesday that it had held a number of meetings with Wintershall at which it was unable to persuade the German firm to act on the 2010 MOU, which had thus since this March been excluded from loading plans at Zuetina.

Kassel-based Wintershall, a subsidiary of the giant BASF conglomerate, has long enjoyed production-sharing terms more favourable than other foreign oil companies in Libya. It has two main concessions NC-96 and NC-97 (also referred to as C96 and C97). It also holds a ten percent share in the 45,000 bpd offshore Al-Jurf field.

Before the Revolution the German company has been lifting 100,000 bpd.  Production however thereafter declined and in 2013 the firm said security was impeding its operations .  After 2014 it withdrew its foreign staff and with the exception of the offshore field, production has been disrupted, not least by the closure of the Zuetina oil export terminal to which its onshore production is pumped.

In his drive to convince foreign oil companies to resume Libyan investments, Sanalla saw Wintershall excutives in Tripoli this February. It is now clear that part of the conversation involved Wintershall moving to the less favourable EPSA IV terms.

Sanalla’s clear assertion is that Wintershall worked with Serraj’s PC on Resolution 270 in order to outmanoeuvre NOC by doing a deal with the UN-backed administration.

Wintershall is reported by Reuters to have insisted that its concessions in Libya are still valid and in full force and that it was in talks with NOC. It confirmed that it had had to shut in some production because its had not been included the Zuetina shipping schedules.