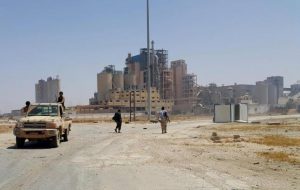 The cement works in Hawari after militants were ejected by the LNA (Photo: Social media)

Plans to rebuild and reopen the two cement factories in Benghazi’s Hawari district have been announced by the owners, the Libya Cement Company (LCC).

The plants closed in mid-2014 when fighting in the area between the Libyan National Army and militants started. For almost two years, the militants effectively controlled the area and it was not till April last year that the cement works were finally recaptured.

At a recent general meeting of LCC, held in Amman, Jordan, the chairman of its parent Joint Libyan Cement Company (JLCC), Ahmed Ben Halim, said that full priority was being given to getting the Benghazi plants operational again.

However, he acknowledged that this would not be easy given that the two factories were damaged in fighting in March-April 2016.

An LCC statement says that instigations have shown the damage to be significant and that extensive re-building will be necessary. It will take at least a year before they can return to production, during which time the site will have to be made safe, new machinery and parts brought in, new skilled construction workers found and necessary utilities such as electricity and gas restored.

Fortunately, the statement notes, management took out Political Violence Insurance with Lloyds of London in 2015. The insurers have now accepted claims as legitimate, it says, adding that these are likely to run into tens of millions of euros.

LCC also owns a third cement factory in Derna’s Fataieh area which, remarkably, managed to continue operating despite being in a war zone, first between Mujahideen and the so-called Islamic State and then between the mujahideen and the Libyan National Army. At the LCC general meeting, the CEO of LCC, Robert Soloman, paid particular credit to the staff of the Fataieh factory for keeping it going.

Meanwhile, Ben Halim has welcomed a decision by the Beida-based interim government to continue paying company staff, despite the fact their Benghazi cement factory being closed.

Earlier this month, the Thinni administration confirmed that it would continue paying a minimum salary of LD 450 a month to employees of a number of foreign-owned or run companies unable to operate because of the military situation.

LCC is 90-percent owned by the Joint Libyan Cement Company (JLCC), itself a joint venture between Asamar Libya and the Economic and Social Development Fund (ESDF). Asamer Libya was bought two years ago from the Austrian parent company, Asamer, by Libya Holdings Group, headed by Ben Halim.

According to LCC, output at the Derna plant has been limited by the availability of the electricity supply as well as difficulties in obtaining spare parts, in no small part because  restrictions on letters of credit and the supply of foreign currency from the Central Bank of Libya.