Investment is the only effective way to promote renewable energy in Libya: GECOL 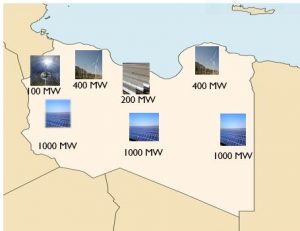 ‘‘Investment is the only effective way that can promote the renewable energy (RE) sector in Libya. It is a successful measure for building projects and development’’, Mustafa Sofia, Technical Consultant at the General Electricity Company of Libya (GECOL). Sofia was speaking at the Libyan Investment Summit in Istanbul held between 9-11 May.

Sofia was referring to the fact that the Libyan state budget is, on the one hand, currently too small and prohibitive to be able to offer large amounts of capital for investment, and the fact that there are too many fiercely competing demands on the state’s budget

The budget is currently running on an annual deficit with a deficit in the balance of trade budget too. Hence, any realistic and serious plan and policy for expanding the RE would involve private and non-state sector investment

‘‘This can be seen by monitoring the RE markets that are witnessing annual increases in growth rates and in installed capacities. Therefore, this explains the role of investment in renewable energy projects’’, he added.

‘‘Solar energy, thermal and photovoltaic conversion and the wind energy conversion technologies represent the effective applications as a result of their important  technical and economic feasibility. They form the largest share of investments over the world’’, he explained.

‘‘It has been found that electricity derived from RE has contributed partially to the demand side management of electricity in some countries. This can be performed through either large scale projects or small applications as well as into improving the load curve. Moreover, RE has contributed successfully to the electrification of remote areas around the world’’. 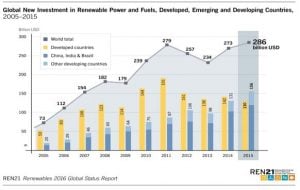 ‘‘More than 140 countries across the world have had RE policy in place associated with increasing reliability rates within time by many entities and countries that adopted RE in their master plans. The value of investments in RE is increasing annually into the billions of USD with respect to source, technology etc’’, Sofia said.

‘‘Libya has an average solar radiation of 2,470 kilo watt hours per square meter, per day (Kwh/m2/day), which is one of the highest solar radiations in the world’’, he maintained.

‘‘Investment has the driving force and ability to promote the RE sector and the implementation of their programs and projects – as long as the RE policy and its master plan had been prepared’’.

‘‘The financial support sources and their methods, such as debts, loans etc, play a crucial role in the investment processes of the RE projects. Technology has a very important role to play too in the success of investments in the sector. Solar and wind energy have been leading the growth rates of RE investments in recent years’’, he explained as he offered an overview of the sector.

In Libya, there are three government parties involved in promoting and developing RE: 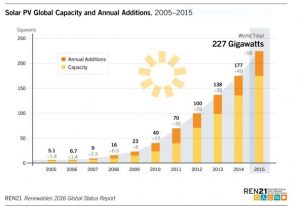 Some government sectors, such as Libya’s oil sector and its communications sector (Madar and Libyana mobile companies) have been using RE applications for a long time, Sofia explained. The mobile phone companies use solar panels to provide short term power or power for remote stations, for example.

Local investors have put forward initiatives with government sectors to invest in RE projects to generate electricity and Municipal councils have good opportunities to develop RE projects within their territories, he added.

Sofia confirmed that currently, investment in the sector would be guided by Investment Law No. 9 and its Executive Regulations issued by the Ministry of Economy (2010). This regulates all foreign investment programmes and projects in Libya through the Privatization and Investment Board.

The Libyan private sector has been engaged and involved in some RE activities by forming local companies or partnerships with global companies, he said.

Sofia explained that GECOL and REAoL have adopted a RE investment vision by offering opportunities in two ways:

The first, is by offering a number of project proposals that are based on the availability of RE resources and the associated studies that have been evaluated and assessed. This includes applications of RE such as, street lighting and solar water heater (SWH) that have a positive impact on electricity network. 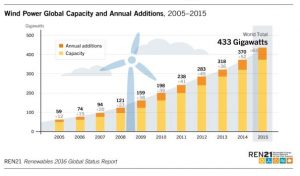 This would be represented in three main dimensions:

These dimensions should be framed into three main axes, these would meet at the point that establish the investment environment.

Each axis would contain a number of important requirements, tasks and procedures that are supposed to be managed together with respect to priorities.

In conclusion, Sofia said that Libya has an important potential of RE sources which could enable it to build a large number of projects in RE applications. The electric infrastructure is available across the whole country. In addition to that, a number of science and economic assessment studies have been prepared for RE potentials. 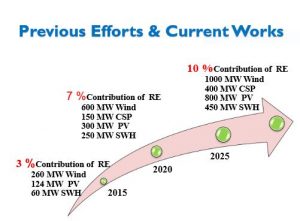 Building an integrated investment environment is crucial to the renewable energy sector and has a direct impact on the success of its applications, he stressed.

The issuance of laws and legislations, and the establishment of associated frameworks, with related supervising measures would enable the ease of management of the sector.

There is a need for reviewing and updating current legislation and laws, and issuing new regulations that are able to support the investment with a new and effective vision. There is also the need to adapt, develop and improve the electric network infrastructure in order to maintain its efficiency.