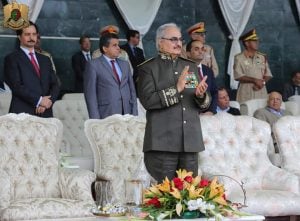 Khalifa Hafter has declared he will not leave Tripoli to the “rogue criminals and abusers” running rampant in the capital. He was speaking at third anniversary celebrations of his Operation Dignity today which took place in Tocra, some 70 kilometres east of Benghazi.

In a well organised and impressive of display by the Libyan National Army (LNA), marked by parades, heavily armed vehicles and an air show, involved 12,000 members of the the armed forces, the field marshal insisted he would not “bow down or succumb” to terrorists plaguing Benghazi and further afield.

“They want to overthrow the army and the state. We will not allow the terrorists to take our country down,” he said.

Hafter called on his forces to not overlook the sacrifices by those who had fallen in combat and instead to rise up and have the courage to rid Libya of terrorism.

“We have given a lot to get where we are now,” he declared.

Hafter said militants had shot at those supporting the LNA, used suicide bombers, stolen oil and sabotaged electricity lines. He also had strong words for militias operating outside his control. Either they became part of the LNA or they would be crushed.

He also thanked the people of Libya for their patience in the fight against the rebels.

However, today was also a chance for the LNA to show off its capabilities. As the field marshal spoke there was a parachute display. Prior to that, 18 fighter jets took part in a flypast.

LNA spokesman Colonel Ahmed Mismari opened the ceremony and some 12,000 members of the LNA from across the country, including a Tawerghan detachment, participated.

The celebration also included the graduation of the 50th batch of LNA soldiers from the LNA’s military college, an event hailed as a sign of the enduring strength of Hafter’s forces.

While interim Prime Minister Abdullah Thinni and his foreign minister Mohamed Dayri as well as boycotting Presidency Council member Ali Qatrani were in attendance, it was clear this was a military day.

Chief of staff Major General Abdul Razzaq Al-Nazhouri, Saiqa Special Forces chief Colonel Wanis Bukhamada and a host of other senior commanders from the army, air force, navy and the military college, all attended the event.

Not present was UN envoy Martin Kobler, despite rumours that he would attend. No foreign officials came.

Meanwhile in Benghazi, an LNA military convoy paraded through streets festooned with flags. Although it was not a holiday, several hundred people also gathered in Kish Square to demonstrate their support for Hafter.

He himself was later in the city to meet and talk with locals. 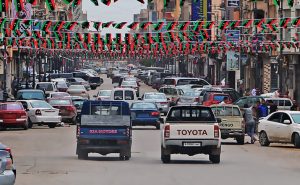 Yesterday there was a celebration there to welcome a “freedom torch” brought by runners from Benina. Saiqa Commander Wanis Bukhamada accompanied it for some of the way.

There were festivities elsewhere in Libya. As far away as Rajban in the Jebel Nafusa on the other side of the country, there were fireworks to mark the anniversary.

Initially, we were informed that House of Representatives president Ageela Saleh was also present. He was not. We apoligoze for the error.