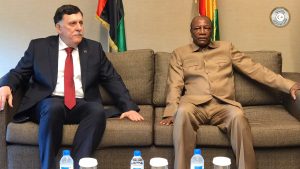 Presidency Council (PC) head Faiez Serraj is the latest political figure to arrive in Guinea for talks with its president and African Union chief, Alpha Condé. It follows visits to Conakry by Ageela Saleh, Khalifa Ghwell and Nuri Abu Sahmain and a week ago by Prince Idris Al-Senussi.

Welcoming the role of the AU and its chief and their endeavours to help Libya, Serraj updated Condé on his Abu Dhabi talks with Hafter and other political developments in Libya. For his part, Condé stressed that dialogue was of crucial importance and, according to the Libyan news agency LANA which quoted PC officials, praised the efforts Serraj had made to bring about reconciliation. He also said a stable Libya was important because the violence afflicting the country affected the whole of Africa as well.

Stepping aside from his role as head of the AU, Condé was also reported saying that Guinea wanted to improve its relations with Libya through a number of economic partnerships.

High-level sources say he is waiting to hear from all of Libya’s key players before drawing up proposals on a way forward.

He has yet to meet with Libyan National Army chief Khalifa Hafter. The field marshal is supposedly the next and last Libyan invitee awaited in Conakry.