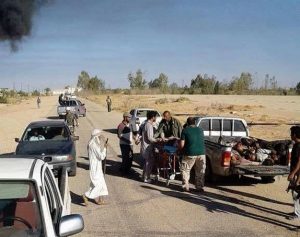 Six of the corpses brought to Brak Al-Shatti hospital after the capture of the airbase last Thursday had disfigured faces which suggested a vehicle had been driven over their heads Human Rights Watch has said.

It has produced a detailed account of the massacre at the Brak airbase based on eyewitness testimony,  including from a survivor from the 12th Battalion and a member of the Libyan Red Crescent, as well as the examination of stills and video records.

HRW spoke to a senior hospital official by phone who said that as of 19 May, a day after the assault by the Misratan-led 13th Battalion, 75 dead had been brought in, all adult males with the exception of two boys aged around 15. Around 30 were military personnel all of whom had died from gunshot wounds and all had bullet wounds to the head. No injured had been brought for treatment and the hospital had seen no casualties from the 13th Battalion.

“He also said that five corpses arrived at the hospital with bound arms, and another six had been disfigured in a way that suggested their heads had been run over by a vehicle” reported HRW.

The 12th Battalion survivor, who did not wish to be named, said that he had been on guard with nine colleagues at the main gate when a large convoy of black armoured vehicles attacked at about 9.30am. The assailants, who the witness claimed included Chadian fighters, shot their way into the camp where they met little resistance.

HRW said that the soldier had hid under an overturned car during the attack.

“I saw the attackers catch my nine comrades who had been running with me from the main gate” he told HRW, “They were disarmed, lined up in a row and made to kneel on the ground. The attackers then sprayed them with bullets and once they were lying on the ground dead, the attackers shot each and every one of them in the head. As they were shooting they were shouting, ‘You apostates, you enemies of God’.”

The soldier said one or two of his comrades had survived by hiding among the dead. The attackers had killed everyone they found including civilian cooks, workers and medical personnel. However, they did not harm the detainees held in the military police base. He added that there had been much looting and weapons and military vehicles had been stolen.

Eric Goldstein, HRW’s MENA deputy director said: “The Government of National Accord should act on its promise to investigate allegations that its troops executed opposing forces who had already been rounded up.

“The authorities need to send a strong message that such crimes will not be tolerated which means that if the allegations are true, they should try those responsible.”