Migrant reception centres to be set up in Chad and Niger 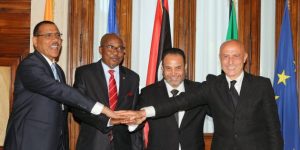 Reception centres for migrants are to be set up in Chad and Niger in an effort to fight illegal immigration through Libya and across the Mediterranean to Italy.

It is part of wider Italian attempts to prevent the movement of migrants to Europe, most of who end up arriving in Italy.

Under the deal Italy will pay for the centres. The four ministers also agreed to:

Tomorrow, Tuesday, migration through Libya will be one of the main topics on the agenda at the ‘Libya Quartet’ meet in Brussels. The quartet consists of the African Union, the European Union, the Arab League and the United Nations.