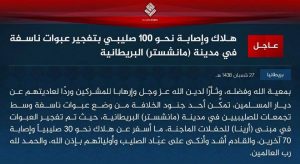 British police have today named the man suspected of the Manchester Arena suicide bombing as Manchester-born Salman Ramadan Abedi of Libyan parents. The 22-year-old died detonating the bomb and is one of the bodies awaiting official identifcation by the coroner, police said. Islamic State has since claimed responsibility for the terror attack.

Abedi lived in the south of Manchester where his house was today raided by police. Neighbours told British media that there was nothing about his behaviour or personality that indicated he was an extremist and that Abedi ‘‘kept himself to himself’’.

British media reports that the suicide bomber’s family are Libyan refugees who had lived in the UK for many years. His father, Ramadan, had been a well-known member of the local mosques and local community. An unnamed 23-year old who lives in the south of Manchester has been arrested in connection with the bmbing.

Abedi detonated the bomb in the foyer of the pop concert’s 21,000 capacity Manchester Arena just after the pop artist Ariana Grande had finished performing and left the stage at 10.30 pm UK time.

He had two siblings, a brother and a sister who were also Manchester-born. It is reported that they are back in Libya with their parents. His father, Ramadan Abedi, is also known as Abu Ismael. Salman has been reported to have recently returned from a trip to Libya.

Analysts are awaiting the official release of the spelling of Abedi’s name in Arabic. If Abedi is indeed of Libyan origin, it is likely that his family may have roots in the east of the country as Abedi is a corruption of Obaidi of the Obaidat tribe centred around the Tobruk and Guba areas of eastern Libya.

Sources from Libya suspect that his family originated from Guba from where, coincidently, House of Representatives president Ageela Saleh who represents the Guba constituency, hails.

Sources have told  the Libya Herald that Salman’s father Ramadan is a Cyrenaica federalist, wanting decentralisation and more powers for a regional eastern authority, but is not understood to hold any extremist religious views. The same was said of Salman himself.

The city of Manchester is known to be a centre for one of the biggest concentrations of Libyan diaspora in the UK and worldwide.